The new Vampire Weekend album is streaming for free on iTunesÂ and will be released Tuesday, May 14. 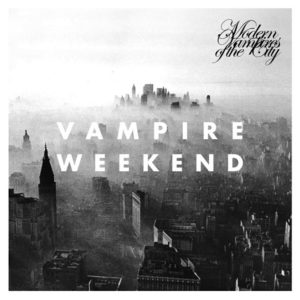 “Step” and “Ya Hey” are two of the best songs I’ve heard all year and will definitely be going on my “Top Songs of 2013” list once they’re released (you can watch the videos for these two below).

In “Ya Hey” Ezra Koenig, Vampire Weekend’s Jewish lead singer “flips the script of the old question ‘If God really loves us, why do terrible things happen?’ Ezra seems to be asking ‘How can God love such terrible things?'” (quote)

Koenig stages a plaintive confrontation with his higher power, listing its non-believers, and shrugging: “America don’t love you/ So I can never love you in spite of everything.” This isn’t a breakup, but an attempt to see the other side in hopes of reconciliation: why should you show such love for the people who go such lengths to deny your existence, when you can’t even get any credit for it?

The scrambled, mutated voices on the hook play off the inpronounceable name of the Lord while flipping the title ofÂ perhaps the most beloved pop song of the past two decades. Such is the scope of “Ya Hey,” but Vampire Weekend put it within the grasp of anyone who wants it with another impossibly catchy song that skips along while carrying the weight of the universe.

The lyrics wrestle with God’s unending, unrequited love and grace for a people prone to wander and disregard a God who does not seem to answer:

And I can’t help but feel, that I made some mistake, but I let it go

Through the fire and through the flames, you won’t even say your name,
Only I am that I am.

And I think in your heart, that you see the mistake, but you let it go

Here’s the video for “Ya Hey” with lyrics:

And here’s the phenomenal song “Step” off the new album: