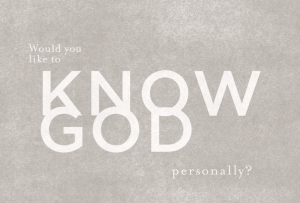 I would love for you to join the discussion on a post I wrote on CruPressGreen:

KGP: Awkward and Outdated or Invaluable to College Ministry? Discuss

The short of it: in working with college students, is there value in using a gospel tract such as the Knowing God Personally (KGP) or a “canned approach” like The Bridge? Or, are those tools irrelevant/awkward/harmful to a post-modern, secular college student?

Mike Schatzman is on staff with Cru and has served in Eastern and Western Europe (as well as in the U.S.). I thought his comments were worth highlighting.

I would add that the KGP is great for post-modern folks too. I have spent 11 years doing campus ministry in post modern countries with less than 2% Christian populations. These students want to know what a Christian is. The KGP is a simple way to explain what a Christian is in a way that makes sense. I was talking with a student named Gui not too long ago. He has never been to church and never held a Bible before. He asked me how a Christian is different from a muslim, etc. We went through the KGP and opened up the Bible to Eph 2:8-9. It was his first time to read something from the Bible. He understood it. Now I didn’t ask him to pray to receive Christ – he was still an atheist. But he understood the gospel. So much so that 3 weeks later we were walking by a church and he talked about Catholics doing penance to earn forgiveness. Then he said to me, “But you don’t believe that you have to earn forgiveness by doing stuff. You believe God gives it freely through Jesus.” I am not sure that he would have gotten that if we had just done the chit-chat approach to explaining the gospel. The KGP helps people understand the gospel.

The last thing I would add is that I have rarely (if ever) seen someone effective in relational evangelism who was not trained, at some point in time, in initiative evangelism using the KGP, Roman Road or some other “canned approach”.