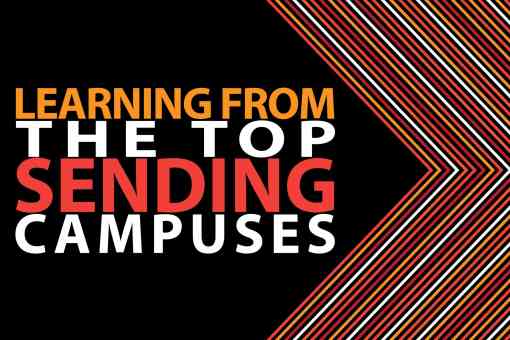 This is part of a series on Sending

I want to raise up long term college ministers who willÂ changeÂ the world for decades to come.
So one of my lingering,Â pragmatic questions has been: “Which is better for raising up longÂ term staffÂ – recruiting to Stateside or the World?”
InÂ the Cru world, I wondered:

(STINT= is an overseas 1-2 year internship)

If our ultimateÂ aim is to raise up long term staff, is it betterÂ forÂ graduates to serve with us for a year or two, or for them to go overseas?Â Where should we invest our recruiting efforts?
Though the data is a little dated (2011),Â Thomas Weakley found:

So STINT was more influential than Interning. International Summer Missions were more impactful thanÂ U.S. Summer Missions.
I asked Jim Rhodes, Cru’s national intern coordinator,Â what he has found.Â He has some great (and current) stats:
This past year, for Cru nationally…
SoÂ 24 % of the Interns joined staff … 19% of the STINTers joined staff.
I asked Jim: “One thing I’m trying to figure out – when it comes to raising up long term staff, is it “better” to recruit to STINT or Internship (i.e. – which one yields more staff).”
He responded:
I think recruiting to both is honestly the best answer to your question.Â  Transition to Staff rates are currently higher for U.S. Interns than for STINT, but my observation is that the leadership qualities of the STINTers who come on staff are higher. Both rates are well below are goals.Â  As a goal we are shotting to have 33% of both our STINTers and our U.S. Interns joining staff each year.Â  Our vision is to grow to the point where we are sending 1 out of 3 on staff … another 1 out of 3 staying with us for a 2nd year … and sending the final 1 out of 3 into the marketplace as part of 100% sent.Â  Currently, we are seeing 2 out of 3 stay with us each year … but we want to see one of those 2 joining staff each year and we are not quite there yet.
So the stats say Internship is higherÂ yielding.
Historically (according to staff self reporting what motivated them to join), STINT has been more influential.
UPDATE:Â A fewÂ guesses as to why the disparity:

What are your takeaways?